December 25, 1989 at a meeting of the founding committee of the Zagreb Stock Exchange, which was attended by representatives of banks from then The Socialist Republic of Croatia (constituent republic and federated state of the Socialist Federal Republic of Yugoslavia) and the Association of Persons and Property Insurance Croatia (today Croatia osiguranje/Croatia Insurance Company), it was decided to launch an initiative to establish a joint stock company Zagreb Capital Market, to establish a list of the first potential founders and start its business activities.

31 May 1991, the Yugoslav Securities Commission approved the start of operations of the Zagreb Stock Exchange, ie the Zagreb Capital Market.

On July 5, 1991, the Zagreb Stock Exchange was officially registred. 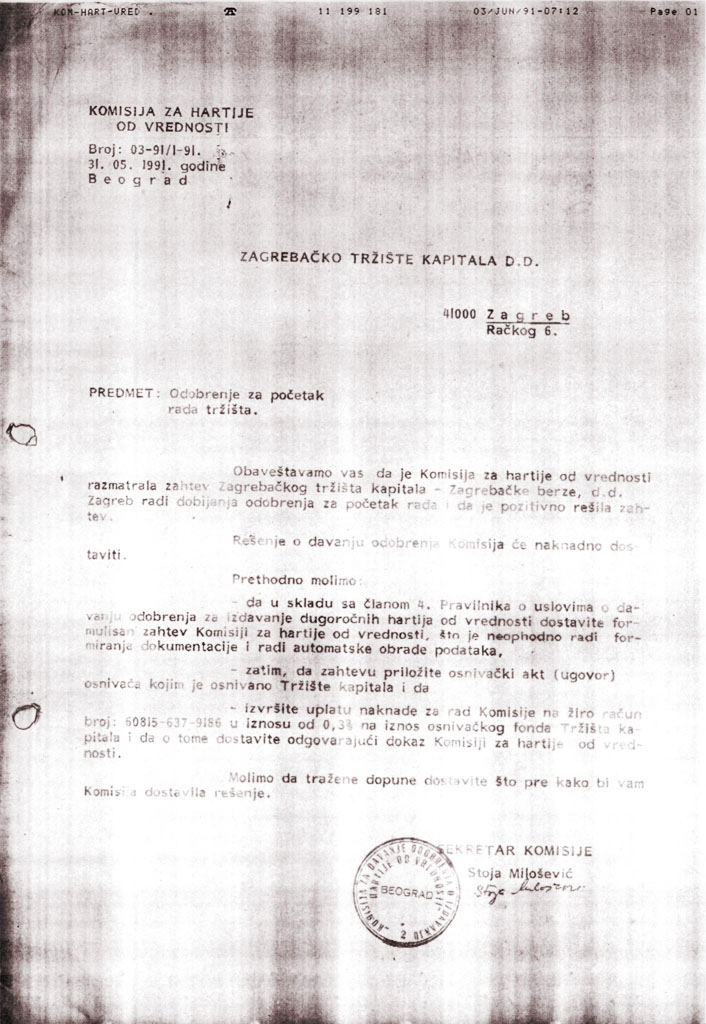 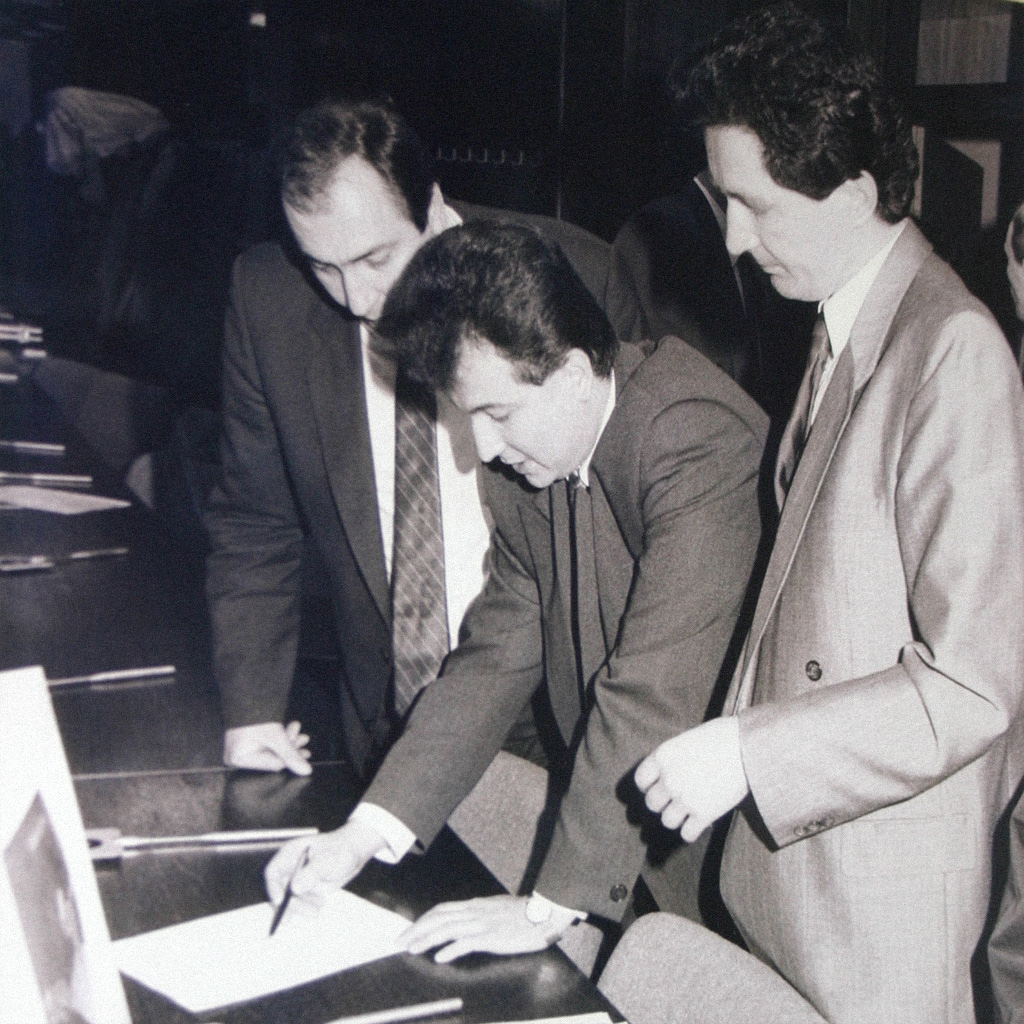 1992, the first financial instruments were listed - bonds of the companies Arenaturist from Pula and Jadranka from Mali Lošinj and shares of Elcon from Zlatar Bistrica.

March 30, 1992, the first transaction was concluded - bonds of the company Jadranka from Mali Lošinj were traded.

The Varaždin Securities Market was founded on 18 February 1993, which will be merged with the Zagreb Stock Exchange in 2007.

The first trading system on the Zagreb Stock Exchange required the physical presence of brokers, who were situated in a trading room during an auction, directly submitting and shouting their bids to actually trade. The auction was run by an auction leader, with bids and offers and transactions entered into a computer so that all relevant data could be displayed on monitors positioned around the hall. Only one security could be traded at any given time. 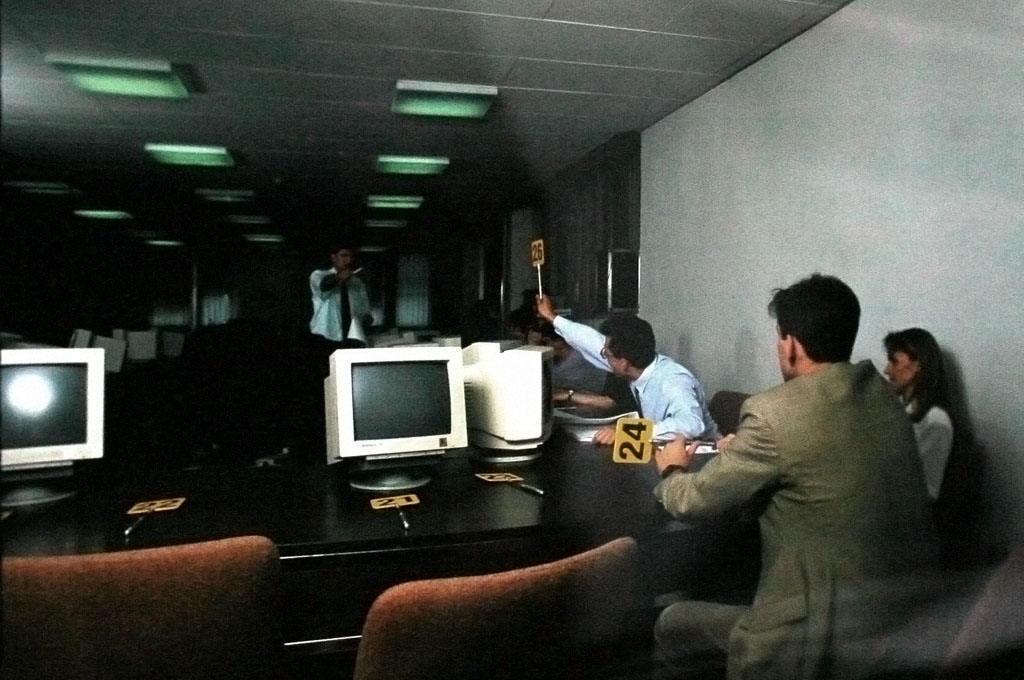 In order to reduce trading costs and simplify the trading process, in March 1994 the Exchange introduced its first electronically distributed trading system: TEST-1 (Telecommunication Trading System). For the first time, the system enabled members to trade directly from their offices, using a personal computer with a modem. Although they traded from their offices, members had a simple means of finding out what the supply and demand on the Exchange. It was done by establishing a connection with the central computer located at the Exchange premises and accepting a data package with all bids/offers and transactions. Trade was order driven and for the first time a considerably larger number of securities could be traded simultaneously and every day. The system was developed by the Zagreb Stock Exchange, and its main feature was the fact that it was available at the time when Croatia’s communication infrastructure was still underdeveloped.

In April 1997, the Exchange launched its first electronic system that enabled trading in real-time and named it TEST-1.5. Exchange members could now be connected to the Exchange at all times, with any new bids/offers submitted to them instantly and automatically. The Zagreb Stock Exchange has 51 members.

On September 1, 1997, the calculation of the first stock index of the CROBEX Stock Exchange (Croatian Bourse Index) began.

Late in May 1999, the Exchange introduced the third generation of its electronic trading system: MOST (Multioperative Trading System). It introduced automatic matching and enabled very simple adjustments to new demands and financial products. In a bid to make information on the status of the order book available to a growing circle of investors so as to improve trading transparency and keep up with the development of the most up-to-date market information distribution systems, in May 2000 the Zagreb Stock Exchange launched its MOST-ich system. It enabled the monitoring of trade in real time on the Internet. 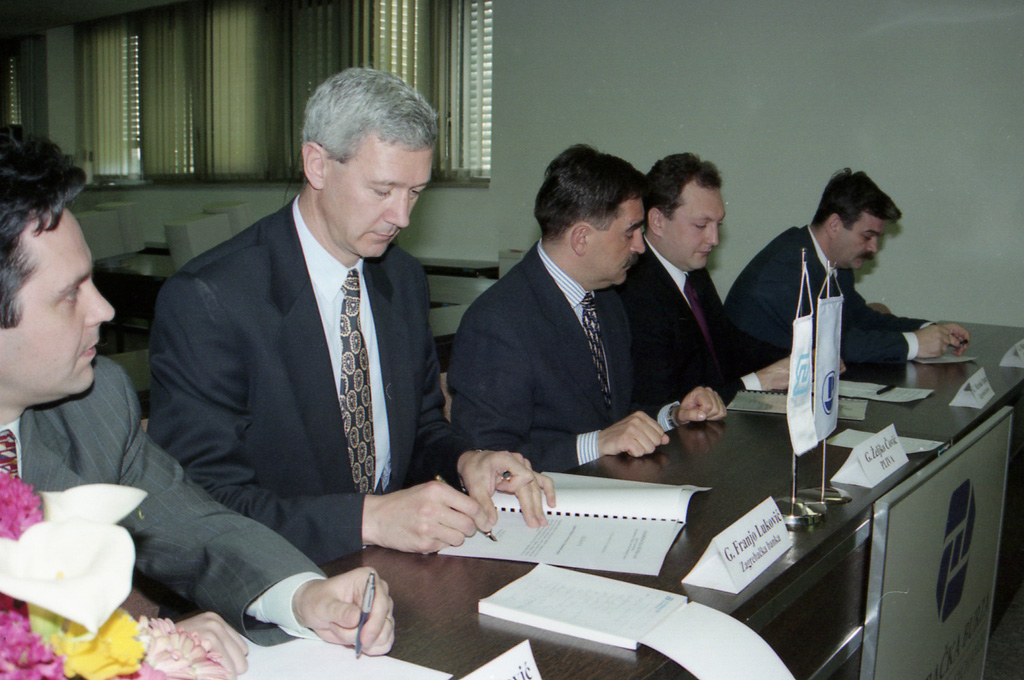 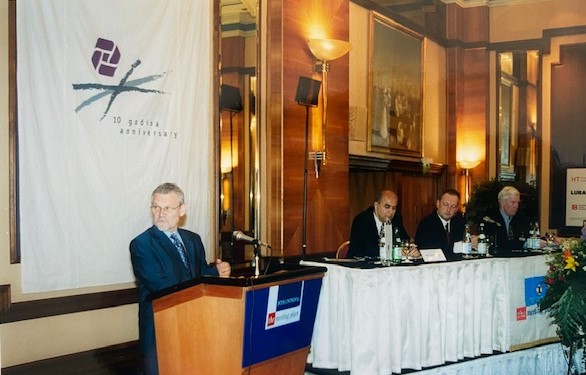 In 2001 the 10th anniversary of the Zagreb Stock Exchange is marked. The Stock Exchange introduces the possibility of conducting a large number of auctions for the  Croatian Privatization Fund through the MOST system.
In 2002, the calculation of the CROBIS bond index begins.

In 2004, the turnover of shares was higher by 75% compared to 2003, CROBEX broke previous records more than 20 times, and at the end of the year by a third higher than at the beginning. Market capitalization increased by 70%. Debt market development. Municipal bonds listed for the first time and the overall number of bonds listed doubled. Mandatory pension funds entrusted the calculation of the joint MIREX index to the Zagreb Stock Exchange.

In 2005, the turnover of shares increased by 80.6%, 25 new listings, and a Memorandum of Understanding was signed with the Vienna Stock Exchange.

Two major events have greatly contributed to the growth of interest in stock exchange trading: the PLIVA public takeover process and the public offering and listing on the Official Stock Market of the largest Croatian oil company INA (the third Croatian share listed in London and Zagreb in parallel).

CROBEX grew 60.7%. The market capitalization of shares doubled compared to the previous year (+ 100.3%) and exceeded HRK 160 billion. Increase in the number of securities listed on the highest and most transparent stock exchange quotation, Official Market by 42.9%. Growth in the number of corporate bond listings.

2007, a record year: regular share turnover 57% higher than in so far most successful 2006, market capitalization grew 78% and the number of transactions doubled.

A whole series of IPOs, new listings and successful stock market stories, involving a large number of small investors who have expanded their investment base. Listing of shares of Hrvatski telekom d.d. and Atlantic Group d.d. CROBEX grew 63.2%.

The Zagreb Stock Exchange has completed three major infrastructure projects: relocation to new premises, merger of the Varaždin Stock Exchange and introduction of a new trading platform OMX X-stream. The Code of Corporate Governance of HANFA and the Stock Exchange was adopted.


2008 was a difficult year for all capital market participants. Turnover by a quarter lower than a year earlier, CROBEX lower 67%. Zagreb Stock Exchange recapitalized to HRK 40 million. 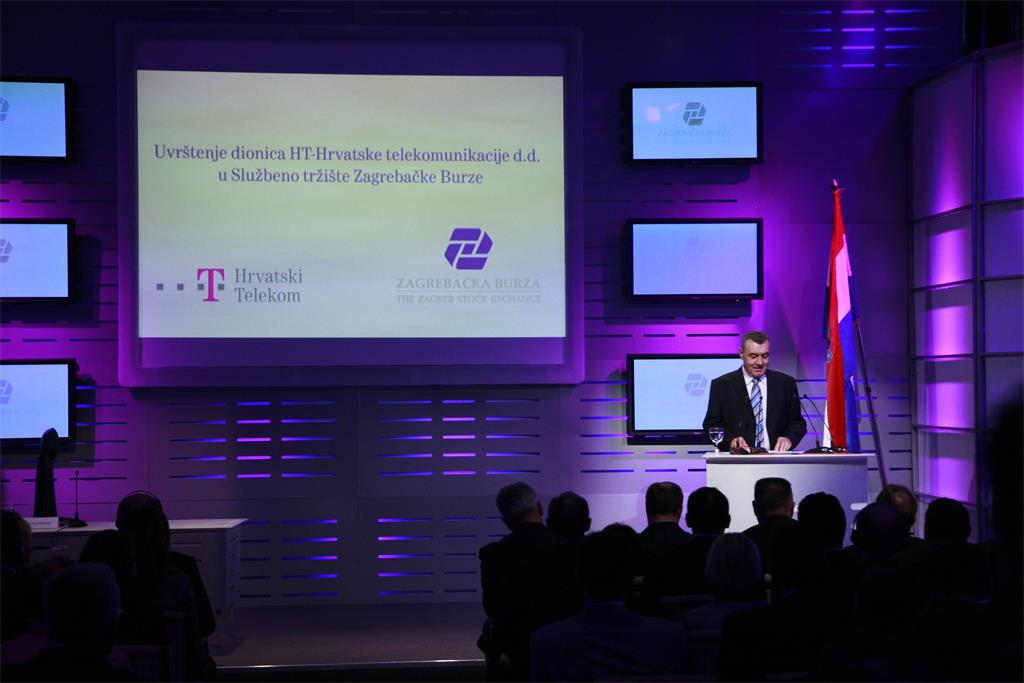 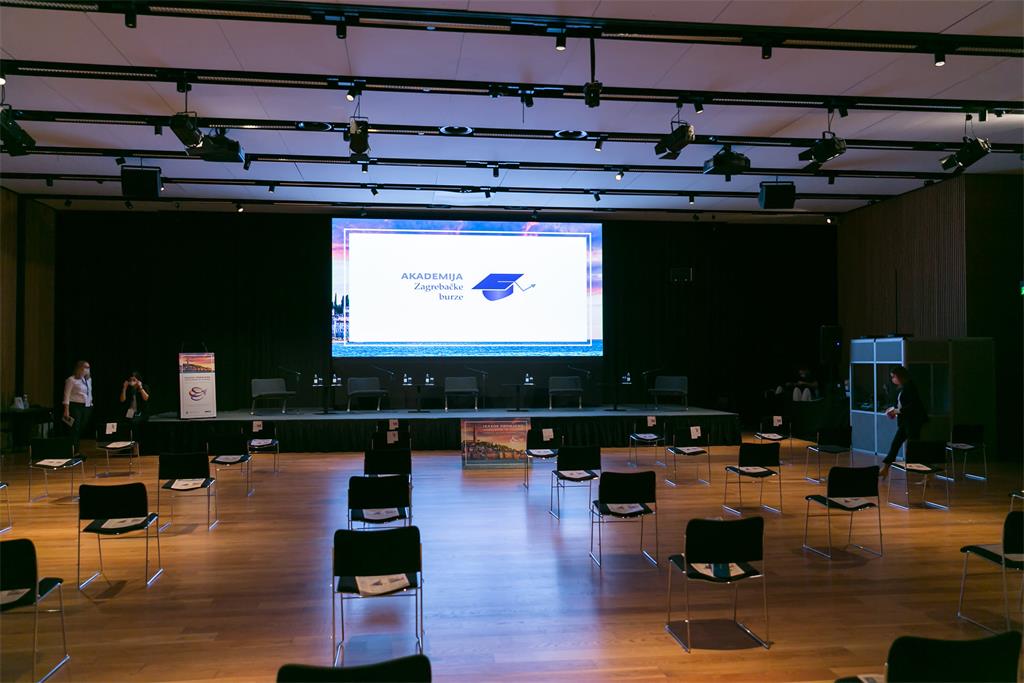 2008 was a difficult year for all capital market participants. Turnover was by a quarter lower than a year before, CROBEX declined by 67%. Zagreb Stock Exchange recapitalized to HRK 40 million.

In 2009, the quotation of Public Joint Stock Companies was abolished.

Continuation of challenging circumstances: regular share turnover halved compared to 2008, and CROBEX ranged from the lowest to the highest point in the range of almost 90%.

2010, a year of recovery: growth of turnover and market capitalization and indices.

Market making has been established.

Corporate Governance Code revised. For the first time, the Poslovni dnevnik (Business Daily) awards were presented for the companies with the best IR, in cooperation with the Zagreb Stock Exchange.

In 2011, the ISO 9001: 2008 quality management standard was adopted, a new CROBIStr bond index was created, and OTC transactions with debt securities can be reported via the web interface.

In 2012, the Zagreb Stock Exchange Awards were established.

In 2013, the first certified investor relations program of the Zagreb Stock Exchange Academy was created.

In 2014, the SEE LINK project of regional trade integration between the Zagreb, Bulgarian and Macedonian stock exchanges was launched, and for that purpose a joint company based in Macedonia was established.

A data distribution agreement has been signed with the Vienna Stock Exchange.

Open-end certificates were traded for the first time.

The first joint investment conference of the Ljubljana and Zagreb Stock Exchanges was organized in Zagreb.

Euromoney named the Zagreb Stock Exchange the winner of the prestigious Best Financial Exchange in CEE award in the Best Managed Companies in CEE category.

The Exchange started assigning and administering LEIs (Legal Entity Identifier) as the first organization in the region to provide this service. 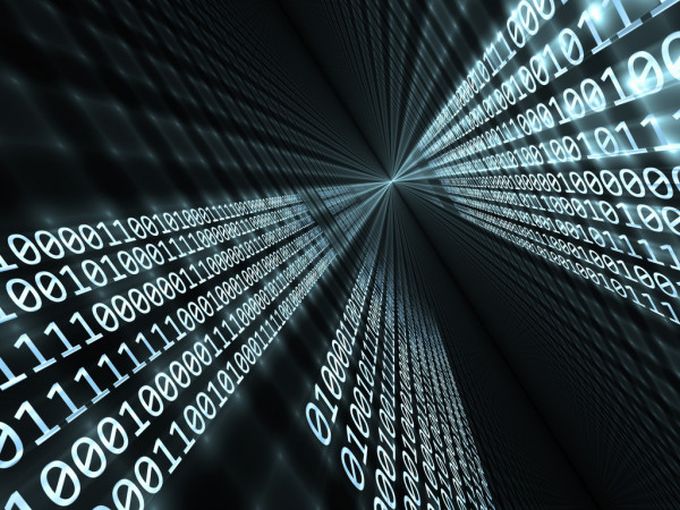 Separation of the regulated market from the multilateral trading platform (MTP), which was renamed CE Enter.

The Zagreb Stock Exchange has started the process of developing a regional capital market for small and medium-sized enterprises (SME Growth Market).

2016 Funderbeam South-East Europe (Funderbeam SEE) is founded, a company based in Zagreb, to facilitate raising capital for startups and trading with its stakes thanks to an innovative system based on blockchain technology.

In just ten months of 2017, more than EUR 2 million of capital was raised through four campaigns for Croatian startups and SME companies, and trading successfully started through the Funderbeam platform.

Preparations for the introduction of the APA service have begun. 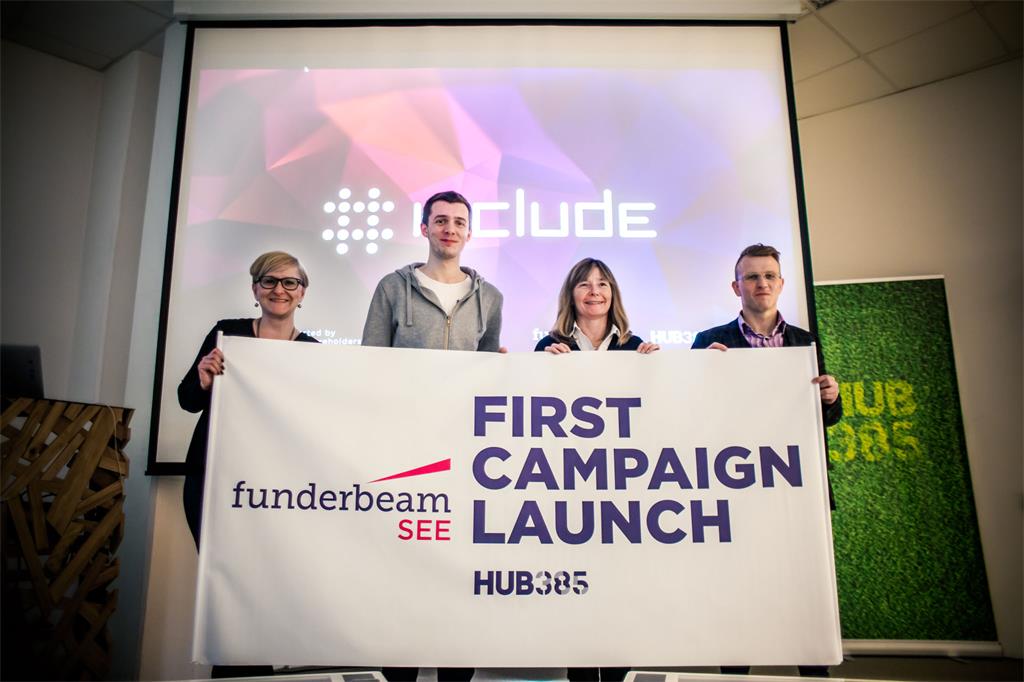 For the first time, the Zagreb Stock Exchange joined the global initiative Ring the Bell for Gender Diversity as one of about 60 world stock exchanges that opened trading on the International Women's Day with the symbolic sound of stock exchange bells.

LEI service has reached the number of up to 1,000 LEI marks administered, and the ZSE LEI service was rated with an extremely high 99.98-100 percent success rate by the Global LEI Foundation.

The project of revising the Corporate Governance Code of the Stock Exchange and Hanfa has started.

The Zagreb Stock Exchange became one of only a few European stock exchanges authorized to provide APA services.

In 2019, the Progress Market was registered as a SME Growth Market, as one the first of such markets in Europe.

The Zagreb and Ljubljana Stock Exchanges held the first presentation of their markets and issuers in the USA.

ZSE was registered as a benchmark administrator.

2020 Through COVID-19 and two series of earthquakes that hit Croatia, ZSE maintained business and trading continuity.

The Zagreb Stock Exchange Academy marked the 10th anniversary of its work, with more than 10,000 participants.

An agreement on cooperation with the Montenegro Stock Exchange was signed, primarily in the field of education.

Four companies listed on the Zagreb Stock Exchange were selected to participate in the European Bank for Reconstruction and Development (EBRD) program aimed at analyzing SMEs. 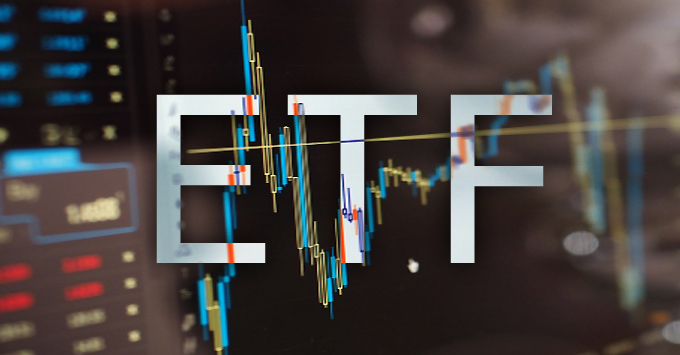