03/08/2022 11:02
Zagreb, March 8, 2022 - The Zagreb Stock Exchange is again among more than 100 world stock exchanges where the beginning of trading on the occasion of International Women's Day was marked by the symbolic sound of the stock exchange bell. 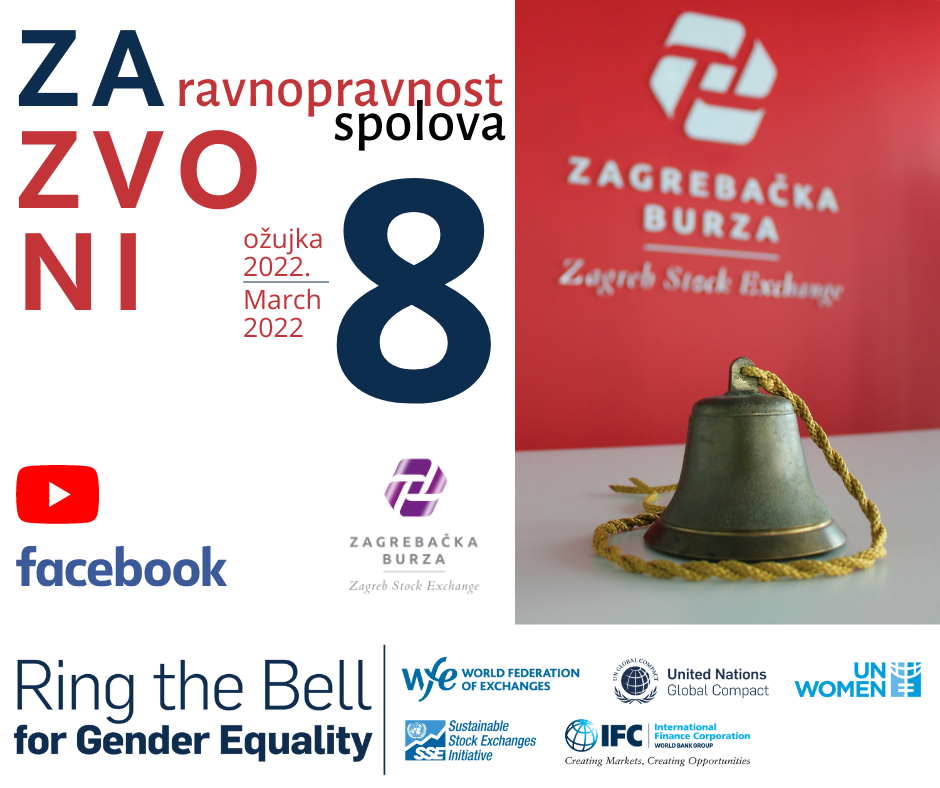 On that occasion, key messages were sent regarding the position of women, especially about the role that the business and financial sector can play in the empowerment of women as an important global goal of sustainable development.

Predrag Fred Matić stated that the under-representation of women in making business decisions is one of the major problems, emphasizing that the average of 30.6% of women on company boards at the EU level does not reflect European values and does not send a proper message.

He emphasized that the field of work was recognized as a leading problem in almost all member states of the Union.

Gender roles and stereotypes have the greatest impact on women's participation in the labor market, and figures show that during the first lockdown in 2020, 1.5 million women across the EU lost their jobs. The fact that women in these circumstances took on the burden of unpaid housework also contributed to the deepening of inequality in the labor market, he pointed out.

On average, women in Croatia are paid 13% less than men and have a 21% lower average pension. Gender inequality permeates almost all social aspects. Lower wages, inequality in the labor market, gender-based violence, unavailability of medical care and the glass ceiling effect are things that women face every day. As the European Parliament's rapporteur on sexual and reproductive health and women's rights I also met with the many systemic disadvantages that women face. Disturbing data such as that about 45% of abortions are unsafe and that it is the leading cause of maternal mortality and morbidity encourage comprehensive and immediate action. Demolishing systemic obstacles and enabling equal conditions and opportunities for all without discrimination must be a joint action today for a more equal tomorrow, concluded Predrag Fred Matić.

Ivana Gažić, President of the Management Board of the Zagreb Stock Exchange, said: We are extremely pleased to be, for the fifth time in a row, one of the more than 90 world stock exchanges which open trading on the occasion of International Women's Day with a symbolic opening bell ceremony. Looking at the companies listed on the Zagreb Stock Exchange, we can say that there have been only minimal changes for years: the average share of women in management boards in the five-year period is 14%, and in supervisory boards 21%. The satisfactory rate was reached only in France, where more than 40% of women are in company boards, but only after the introduction of quotas for large companies in 2011.

According to a McKinsey analysis that included Croatia, women make 52% of the total population in seven Central and Eastern European countries and more than 60 percent of graduates. Yet at the same time they make only 45% of the workforce, and only 37% of all managers are women. Only 8% of CEO positions are held by women, and 44 % of leading companies in the SEE region do not have a single woman in executive positions. Research has shown that stepping up efforts to close the gender inequality gap in Central and Eastern Europe could "unlock" as much as € 146 billion of annual GDP by 2030 - an 8% increase from a no-change scenario in relation to the current situation. Several studies have shown that an adequate number of women in executive positions reduces business risk and improves business results. One study found that a change from a non-female lineup in corporate leadership (CEO, board and other leadership positions) to 30% of women correlated with a possible 15% increase in profitability for a typical company.

In 2021, Croatia had 59.2 points in the Gender Equality Index calculated by the European Institute for Gender Equality. Every year the situation is slightly better, but we are still far from the European average of 68 points. According to this index, gender inequalities are most pronounced in the domain of power, which measures gender equality in decision-making positions in the political, economic and social spheres.

With this event, we call for the empowerment of women in the business and especially for the greatest possible representation of women in key decision-making positions. We want to encourage positive changes and participate in building an inclusive society that provides equal opportunities for all, added Ivana Gažić.

For the eighth year in a row, the Ring the Bell for Gender Equality was held in many countries around the world to highlight the important role of the business sector in promoting gender equality, in order to achieve sustainable development goals and raise awareness of women's empowerment. The global event is organized by the UN Global Compact with UN Women, the Sustainable Stock Exchanges Initiative (UN SSE), the International Finance Corporation (IFC) and the World Stock Exchange Federation (WFE).