Croatian regions were split between the Austrian and Hungarian part. However, the Croatian-Hungarian Compromise granted a certain level of autonomy to Croatia and Slavonia, even though not in the field of economy, trade and transport, which were governed by the government in Budapest.

Anxious to gain as much independence as possible, Croatian businessmen were striving to form the fourth economic department, so they founded an Association of Industrialists and Merchants of Croatia and Slavonia under the auspices of the Chamber of Commerce.

The Association also spurred the establishment of the Commodities and Valuables Division in 1907. It was inaugurated in the building of the Chamber of Commerce on 15th June, 1907. S. D. Aleksander headed the division, which effectively launched the market in the stocks of local factories and financial institutions that major exchanges in Vienna and Budapest would not admit to trading. This Exchange was active until 1911. 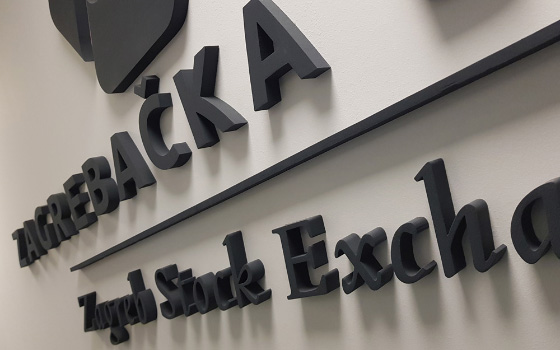 After World War I, the Zagreb Exchange reopened in 1919, its securities department first, then the commodities department, followed by the Exchange Court of Arbitration in September 1919.

This Exchange was subordinated to the Ministry of Trade and Industry; it held all the rights appertaining to corporations including organization autonomy and its purpose was to facilitate and regulate trade in various kinds of commodities, securities, drafts, money (foreign currency and notes) and precious metals. The Exchange was supervised by a Ministry of Trade and Industry commissioner.

Despite all kinds of restrictions on the Exchange operations, the Exchange earned sufficient amounts of money to begin the construction of its new building. As a monument to the glorious past in the center of Zagreb stands a beautiful stock exchange palace, opened in 1927. The building is a world heritage site entered into the Register of Cultural Monuments.

The auditorium was once equipped with 52 telephone booths for visitors, which made the Zagreb Stock Exchange the most modern European stock exchange of that time.

Since the Exchange as a speculative institution had no place in the socialist society, its operations were suspended in 1945.
More on Zagreb Stock Exchange till 1945

Croatia’s exchange did not see its revival until as late as 1991, when 25 banks and two insurance companies established the Zagreb Stock Exchange as the central place of securities trading in the Republic of Croatia.

The Zagreb Stock Exchange has kept this role to date. From the initial 25 members (brokerage companies), thanks to the trade growth and development the number of members has climbed to some forty-odd active traders: banks and private brokerage companies. At the very beginning, trading took place at big auctions held at the Exchange head office with all brokers actually physically present. In 1994, an electronic trading system was introduced, enabling member brokers to trade on the Exchange via a telecommunications link without leaving their offices throughout Croatia.

A rapid development of share ownership and trading in Croatia is best illustrated by the fact that in the first five years following the introduction of the electronic trading system, between 1995 and 2000, the Zagreb Stock Exchange market capitalization grew almost 10 times (982.6%).

Securities (stocks and bonds) are traded on the Zagreb Stock Exchange via the electronic trading system.

Brokerage companies that are Exchange members are connected with the Exchange head office via special telecommunication lines; they enter their sell and buy orders and conclude transactions with other brokers directly from their offices. This means that the physical place where securities are traded (traditional trading floor) no longer exists, but rather trading takes place among electronically connected traders. All member brokers have access to the trading system in real time (with not time delay/shift) so that they can enjoy equal status with respect to the receipt of information on the current securities offer at exactly the same time.

The Exchange is open for trading every working day, with the exception of holidays listed on the Exchange's website. Trading reports with daily share prices are available to any interested party in daily newspapers, from specialist financial data vendors as well as on the Exchange's website and via a specialized exchange information distribution system, named the ZSE Monitor.

As a relatively young exchange, the Zagreb Stock Exchange had the opportunity to use the possibilities provided by modern technology to organize trading in order to make its operations more competitive and more readily available. As the Exchange itself developed from a low trading volume to the current level, so did the technology used it.

The first trading system on the Zagreb Stock Exchange required the physical presence of brokers, who were situated in a special room during an auction, directly submitting and shouting their bids to actually trade. The auction was run by an auction leader, with bids and offers and transactions entered into a computer so that all relevant data could be displayed on monitors positioned around the hall. Only one security could be traded at any given time.

Toward the end of 1992, the Zagreb Stock Exchange started conducting public auctions on behalf of the Croatian Privatisation Fund, using new auctions software support developed by the Exchange.

In order to reduce trading costs and simplify the trading process, in March 1994 the Exchange introduced its first electronically distributed trading system: TEST-1. For the first time, the system enabled members to trade directly from their offices, using a personal computer with a modem. Although they traded from their offices, members had a simple means of finding out what the supply and demand on the Exchange. It was done by establishing a connection with the central computer located at the Exchange premises and accepting a data package with all bids/offers and transactions. Trade was order driven and for the first time a considerably larger number of securities could be traded simultaneously and every day. The system was developed by the Zagreb Stock Exchange, and its main feature was the fact that it was available at the time when Croatia’s communication infrastructure was still underdeveloped.

In April 1997, in order to meet the needs of ever-increasing trade intensity, the Exchange launched its first electronic system that enabled trading in real-time and named it TEST-1.5. Seemingly very similar to the TEST-1 system, the TEST-1.5 system included an important upgrade: Exchange members could now be connected to the Zagreb Stock Exchange at all times, with any new bids/offers submitted to them instantly and automatically. In order to ease the transition from one system to another, the TEST-1.5 system also enabled the brokers who still used the older version of the system to participate in trading.

Late in May 1999, the Exchange introduced the third generation of its electronic trading system: MOST. MOST abandoned the old software kernel, while including a simpler user interface and also compensating for a number of limitations of the TEST-1.5 system. Most importantly, it introduced automatic matching. In addition, the MOST system was designed in such a way as to enable very simple adjustments to new demands and financial products as it expanded in the course of time.

In a bid to make information on the status of the order book available to a growing circle of investors so as to improve trading transparency and keep up with the development of the most up-to-date market information distribution systems, in May 2000 the Zagreb Stock Exchange launched its MOST-ich system. It enabled the monitoring of trade in real time on the Internet. Subscription to the system was available either through brokerage companies or directly from the Exchange. In order to meet the need for an increasing number of Croatian Privatisation Fund auctions, early in 2001 the Exchange enabled the option to conduct these auctions through the MOST system. Since their physical presence was no longer required as members could participate in public auctions directly from their offices, the costs were reduced considerably while the system also allowed a greater number of auctions to be held.

Technology of the Future

The trading systems used by the Zagreb Stock Exchange up until autumn 2007 were more than satisfactory for the state of development of the Croatian financial market at the time. Their particularly significance lay in the fact that the very concept as well as system development were the work of a team of exclusively local experts: late Professor Dean Rosenzweig; Davorin Ruševljan, Head of Trading and Technology at the Exchange of long standing; Darko Perhoč, M.Sc., also the Exchange’s long-time expert for networks and network services; and Davorin Meštrić.

In 2007, the Croatian financial market consolidated as the Varaždin Stock Exchange merged with the Zagreb Stock Exchange. These new circumstances, resulting in a larger number of listed securities and greater trading volume, along with a natural development of the financial market that saw the investment climate improve and gave rise to a stronger interest of all market participants in new financial products, highlighted the need for the implementation of a new system that would be able to meet the needs of the small, but extremely fast-growing Croatian market. The new trading platform, NASDAQ OMX's X-Stream, was launched in autumn 2007 and was used untill July 2017.

From July 7, 2017, trading on the Zagreb Stock Exchange takes place through the Xetra trading platform.

Organization of the Exchange